A master’s Degree in Commerce and Doctorate in Business Management from Agra University, Agra. Dr. Chaturvedi has m 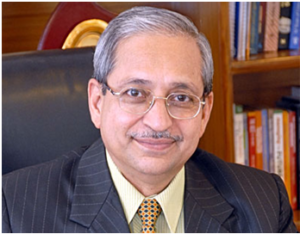 ore than 35 years of experience in teaching, research and administration. As former Director with All India Council for Technical Education (AICTE), New Delhi, a statutory body under MHRD, Government of India, he has been associated with formulation of policies, planning, regulation and control of Management Education as well as other disciplines under technical education. While working with the National Board of Accreditation (NBA) and the AICTE Board of Studies in Management, he was involved in multi-dimensional improvement of quality in Indian B-schools. Dr. Chaturvedi joined Birla Institute of Management Technology (BIMTECH), New Delhi as Director in 1999.

Dr. H. Chaturvedi started his career as a teacher at University of Agra in 1977. He continued to teach there till 1995 with dedication and commitment .In 1995, He was appointed as Director, AICTE. He continued there till 1999 and gained lots of experience in management education. The second big change in his career came when he got invitation from Birla group in 1999 to join BIMTECH as a director. The third big change occurred when he was asked to develop a new campus at Greater Noida in 2004 – which has now become a permanent abode for management education. In the year 2013, they were able to launch another campus of BIMTECH in Bhubaneswar –which has since 2016, started functioning as Birla Global University.
Dr. H. Chaturvedi has a good habit of reading books and periodicals for which he devotes two to three hours’ time every day. Occasionally, he writes articles and also publishes books on different themes. He is also fond of listening to classical, semi-classical and popular music by using Bluetooth technology.