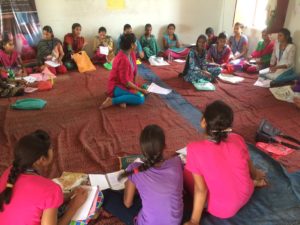 This was the first phase of the Project“Protsahan Chiraiyya”. Prior to the launch of this programme, the girls of Neemka, especially between the age group 12-18 were lacking self-confidence and self-esteem. They were even scared of talking to people and never came out when any visitor visited their home. Many of them were either planning to leave the formal education or some of them had already left. Problems like uneducated parents, lack of educational facilities, and other social ills were too prominent in the Neemka village.

Looking at the condition of the girls the curriculum of Life Skill Education program was designed. After the completion of the programme, the girls were expected to develop an increased awareness of their strengths, interests, values and the tools fundamental to getting into the mainstream of society. The first unit of the project was called as Life Skill Education and was spread over 5 Batches 200+ rural girls were trained and their lives have been totally transformed. This phase envisions were to provide educational and training avenues for the Chiraiyya’s.

For a successful training programme, a depth analysis of who need training and what kind of training is needed was very important. It was needed to know about the current status of the Chiraiyya’s. A pre-evaluation questionnaire was administrated to the Chiraiyya’s at the

beginning of the project to know their current awareness level in the area of the training programme. The curriculum of the programme was designed in accordance with the result of this questionnaire.

Objectives of the project

The overall objective of the project was to ensure the all-round development of the Chiraiyya’s. Over the seventeen-week program, the girls were expected to develop an increased awareness of their strengths, interests, values and the tools fundamental to getting into the mainstream of society. The Project has been conceived and executed to maximize its impact on girl students who had enrolled.

The Methodology of the Project

The project was implemented through a well-structured training program for adolescent girls. As per the requirement of Chiraiyya’s the curriculum of the programme was divided in 17 weeks. The Basic Structure of the programme was Jeevan Kaushal, Jeevan Chahak, Samwad, Agradut and Udaan. All the modules were taken care of by the implementation team and time to time support was provided by the core committee. Girls were motivated to attend the classes regularly and they were given a token of appreciation for 100% attendance. This training program was conducted at Ucch Prathmik Vidyalaya – I at Neemka Village, Jewar Tehsil, Greater Noida (UP). The congenial environment was provided to the girls so that they could freely express themselves and seek guidance for their future.

Basic Structure of the programme: 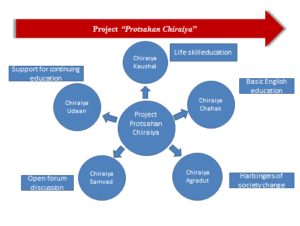 Jeevan Kaushal-Essential Life Skill: Jeevan Kaushal was initiated to provide training about the basic life skills to the Chiraiyyas.

Samwaad: Dialogue. Time to time interaction of the girls with various successful personalities of society was part of the Project “Protsahan Chiraiyya”.  The motive behind these interactions was to allow the chiraiyaas to know the outer world and meet the people who are contributing to society in one or the other way. 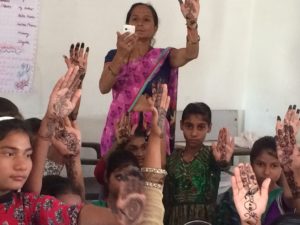 Agradut: Torchbearers: The ultimate aim was to make the ‘Harbingers of Society’ and spread the positives vibes for society. Chiraiyyas were oriented to perform the role of torchbearers /facilitators/motivators who would further propagate the vision of Project Protsahan Chiraiyya across the village.

Udaan: In this unit, Chiraiyya’s provided with the actual wings to fly. The activities of the unit were divided into two parts. In the first part, Chiraiyyas were given livelihood training to enable and empower them to leverage their newly acquired knowledge and skills to earn a living and be socially useful and productive. The second part of this unit was to make Chiraiyya’s earn. Chiraiyya’s started earning with the skills they learned in the livelihood training module.